EU is facing a piglet crisis

The Chinese growing demand for pork is making big producers in Europe to keep the piglets for fattening and export.

Europe may be facing a piglet crisis in the market, according to Mary Pana, president of Romanian ACEBOP, who thinks that big producers in the EU are interested now to fatten the animals and to export it later in the Chinese market.
“In Romania, we desperately need a law to encourage animal reproduction. In the pig sector, part of the farms have been affected by ASF virus and those that are modernized  are wainting for the law to pass. Piglet importers are complaining about the fact that they are confronted with unfair or blocked contracts. Also, the prices have skyrocketed last months, up by 25-30%”, she explained during a meat industry seminar in Bucharest, SIIC’19.
In 2018, Romania’s overall pig inventory decreased by 8.7%, the same percent as in breeding sows.
Before the ASF crisis, in 2017, the East European country was ranked No.15 in the world’s largest importers of pork. During the last 5 years, pork imports have increased by 52%. 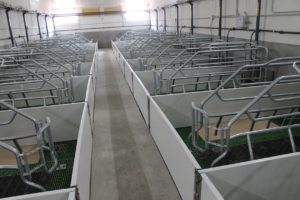