China to buy more pork in the coming months

The Chinese government is urging the farmers to rebuild their pig herds and intends to buy more pork for its reserves.

The ongoing ASF crisis in China is forcing the government to secure the supplies of pork for its reserves, as one of the officials in the Ministry of Agriculture declared for Reuters.
Also, the producers are encouraged to rebuild their herds as volatility in pork prices is expected in the second half of the year. The ASF virus was reported in 24 Chinese provinces leading to the culling of almost 900,000 pigs.

According to Tang Ke, director of the market and information department at the agriculture ministry, national pig stocks at the end of 2018 were 5% lower than the previous year’s level, while numbers of breeding sows were down by more than 8%. He also stressed that China expects to use its reserves to help stabilize the market, buying more pork and releasing more to reduce the large gap in prices between producing and consuming regions.

In the last 6 months, the Chinese pig industry has still been significantly disrupted. Provinces where there are active outbreaks, and those surrounding, are subject to restrictions on live transport. And that represents a problem in supplying the domestic market as during the industry’s recent modernisation programme, many pig farms were relocated to remote Northern areas. However, most abattoirs are situated in the south near more populous areas, necessitating long-distance transport to slaughter. 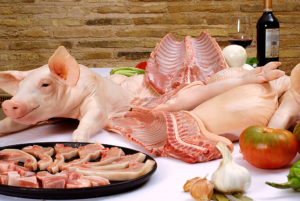 The average price of live pigs in the second week of January was $2.02 per kg, down 1.6% from the previous week, and has dropped for four consecutive weeks. Pork prices have also declined in the last week by 0.9%, and are down almost 8% versus last year.